After a recent Champions League loss, Manchester City defender Micah Richards declared in the heat of the moment that his side were not comfortable playing in a back three. Later, manager Roberto Mancini said he wanted his side to be comfortable playing in any system he requires of them. On this cool night in Wigan that was put to the test and the players passed with flying colours.

Mancini may have won a title with this side and is coming up to his third anniversary in charge of City, yet it is clear he isn’t a manager who is content with one formation. He did, after all, go with a back three in the Community Shield just a few weeks after the club lifted their first top flight title in 44 years. While most managers find a system that they like and usually stick with it, the Italian has became a obsessed with the rotation of systems throughout games. Nowhere else is this more evident than in central midfield. In the six league away games, prior to this, he’s picked two holders three times and one holder three times from the start. He’s ended with two holders four times and no holders twice. At Wigan he opted for two holders in Javi Garcia and Gareth Barry with Yaya Toure pushed further forward. Maicon and Mario Balotelli also returned alongside Garcia who started his first match in almost two months. The decision was a boost to those who feel Toure needs to be higher up the pitch but the experiment lasted 45 minutes and didn’t work. Toure spent the majority of the first half pressing Wigan’s back three but when City were in possession he was almost in David Silva’s way in an attacking sense as the Spaniard loves to roam vertically and have a free role. Against a natural two in central midfield, with a back three, it made sense to eliminate one central midfielder, go man-to-man, and push a man forward and try to create a 4-on-3 when Wigan’s wide players were advanced. At the start of the second half he went to a 4-4-1-1. Fifteen minutes after that, Mancini had seen enough from Garcia who was regularly being outrun in midfield. Barry was placed back centrally with Toure and James Milner was brought on to play wide right. This pushed Sergio Aguero central and closer to Silva who was now impacting the game a lot more. The addition of Milner seemed to unleash Maicon. Milner is an underrated player who is excellent at defending his position and bringing comfort for forward-thinking full-backs. The pair connected well immediately and certainly helped Mancini in his next move, just nine minutes after his last one, when he boldly withdrew Aguero and brought on Aleksandar Kolarov. It was time for width and time for a back three: Less than a minute later Mancini was made to look like a genius, when Ali Al-Habsi spilled a ball and allowed Mario Balotelli to pounce. 1-0. Two minutes later it was 2-0 and game over when Milner sent in a rocket of a shot past Al-Habsi. Both goals came from wide areas. The first via Milner on the right stretching Wigan’s back five, leaving space in the middle for Silva to run into and supply Barry whose shot was spilled by Al-Habsi. The second one came via the excellent Kolarov whose cross to Silva, drew in FIVE Wigan players, before the Spaniard laid it off for Milner to finish the game off.

This was probably City’s most complete away performance of the season, yet it was far from perfect. In their opening 45 minutes they were again too narrow and didn’t get service to Balotelli. However, as the game went on the tactical changes brought the best out of their players, stretched Wigan and led to a barrage of chances on Al-Habsi’s goal. 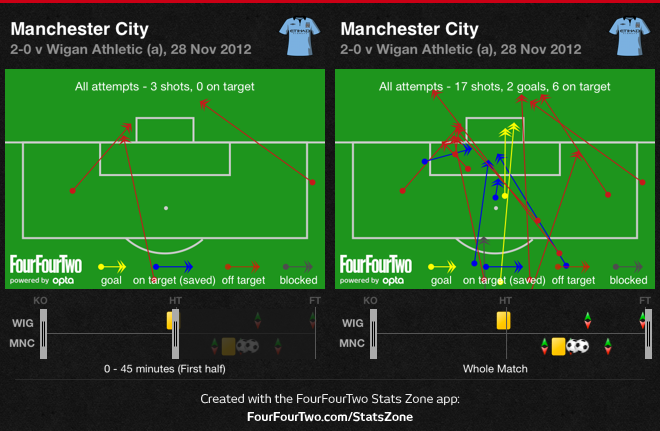 Mancini has quietly assembled a squad of versatile players who can play in different areas and even in this game when Milner left injured he was able to use Mr Versatile himself, Pablo Zabaleta, in central midfield and bring on Kolo Toure to play in a back three. The biggest problem Mancini continues to wrestle with is width and when to use it. It was natural to try and go narrow and win the game down the middle against Wigan but the moment he stretched his team later in the game he found that his players were able to prevent the Latics from creating overlaps themselves. It is clear that City continue to struggle to open up teams away from home but as the game goes on, spaces develop and their opponents tire, as evidence in the amount of first half goals scored compared to second half goals this season (2 to 7). What is still to be determined is whether Mancini’s changes regularly cause this or benefit only when their opponents lose their shape. Games at Fulham and West Brom, for example, were difficult to pinpoint. However, on this night it was clear this victory was on the manager who noticed the changes and reacted accordingly.